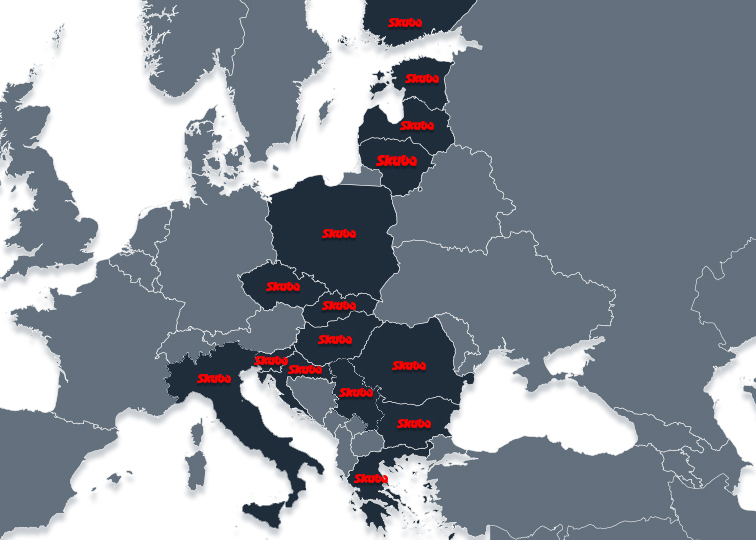 Initially, in 1974, today's company was established as an automotive transport company, with transporting cargo as its main activity. After privatization, in 1992, the company was reorganized into UAB SKUBA. Since that time, the company changed its field of activity from a transport company, that once had over 500 trucks, to a company that is selling spare parts for trucks, new and used trucks in Lithuania, Latvia, and Estonia as well as offering repair and technical maintenance services for commercial vehicles, trucks, busses, lorries and their trailers and semitrailers. Today, Skuba is a group of companies with headquarters in Vilnius. Its subsidiaries operate in Finland, Estonia, Latvia, Lithuania, Poland, Hungary, Romania, Slovakia, the Czech Republic, Bulgaria, Slovenia, Croatia, Greece and Italy. SKUBA has a growing network of authorised IVECO repair and technical maintenance services, consisting of business units based in Vilnius, Kaunas, Klaipeda, Siauliai, Ryga and Tallinn. Modern warehouse with an area of 20 000 square metres is based in Vilnius from where the spare parts are supplied to all subsidiaries. SKUBA is active in more than 100 European cities.

Starting from 2000, and until May 2015, SKUBA was representing RENAULT TRUCKS in Lithuania and Estonia, was selling Renault trucks and spare parts to them, and providing repair and technical maintenance services.

Since 1st July 2015, SKUBA is representing IVECO truck manufacturer in Lithuania, Latvia and Estonia, and is selling new IVECO commercial vehicles and trucks, and offering repair and maintenance services.

Our request form uses Google Recaptcha which helps us distinguish you from online robots sending us spam messages.

You can select which cookies are to be accepted.